We all have conflicts – ranging from little disagreements all the way up to major fallouts. How you respond to conflict, what you say or don’t say, can either escalate or reduce the conflict. To breakthrough conflict I’ve found nothing better than engaging the person by asking honest questions. 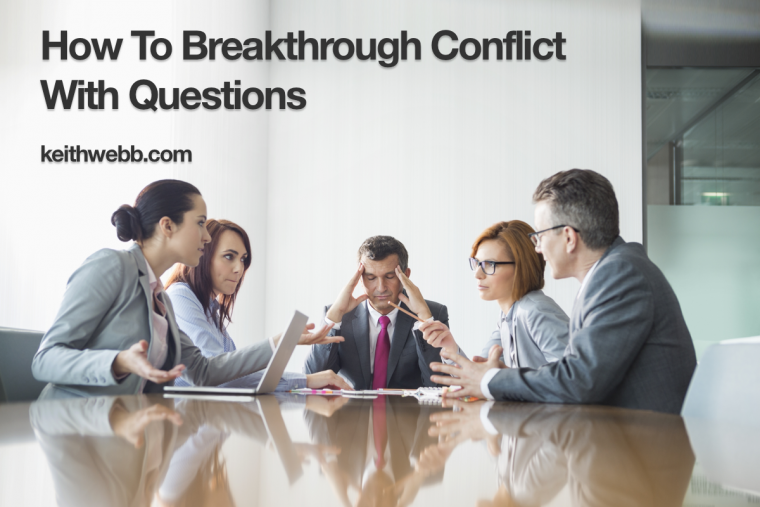 I don’t like conflict. My natural style of conflict management is avoidance and silence. If I argued, it either didn’t help, or more likely, I said something that made it worse. This isn’t very productive, for obvious reasons.

I was frustrated by my natural (sarcastic) tendency to escalate conflict when arguing. I searched for better responses. What I found were questions.

The 3, Sometimes 4, Goals of Arguing

We argue because we don’t agree with the other person’s position. That viewpoint either doesn’t match up with what we believe or we are somehow threatened by the implications. Here are four common goals of arguing:

The perfect storm is when both people do the first three at the same time! This article addresses how you can do #4 without the argument.

Think about a recent argument. I bet most of what was said were statements. Arguing with statements tends to escalate the conflict. Each statement tries to one-up the other person’s. More facts, more history, more “you said,” and if those don’t work, more emotion and volume.

Take this snapshot of a meeting:

Samantha: “Yes they will. I’ve already spoken to several people who agree this is the best way to go.”

Robert: “We tried something like that before. It didn’t work!”

Samantha: “Just because you weren’t able to pull it off, don’t block it now.”

Robert: “It wasn’t my fault! It was a bad idea in the first place. And I don’t want to waste more resources on it now.”

Arguing with statements is likely to increase the tension, defensiveness, and volume. We think we’re making our case, but as this example shows, neither person made any progress in persuading the other. More importantly, the merits of the plan were lost in the emotional battle that took center stage.

Try arguing with questions instead of statements. Ask questions to understand the other person’s thinking. When I do this I find myself agreeing with many of the intentions, motivations, and some of the how-to of the person’s idea. I’m able to isolate the specific point I don’t agree with and discuss that, while affirming the rest.

Samantha: “What part of it don’t you think they will go for?”

Robert: “Well, we tried this a couple years ago and it didn’t work.”

Samantha: “What similarities do you see between this plan and what was done before?”

Robert: “It’s the same approach to motivating people – give them more money, new job titles, a couple of parties.”

Samantha: “Why do you believe these things previously didn’t cause change?”

Robert: “Because those things try to cover up people’s dissatisfaction with management. People are treated poorly, taken for granted, and blamed when things don’t go well. A little money and a party won’t change that.”

Robert: “We need to work with management to shift their attitudes and behaviors toward employees. That’s where I see leverage for change.”

Samantha: “I agree with you Robert regarding the need for management’s attitudes to shift toward employees. May I clarify a couple points of the plan in light of what you said?”

By asking questions Samantha was able to engage Robert in a discussion and understand the basis for his objection to the plan. Samantha ignored, for the moment, several points where Robert misrepresented the plan. She found common ground with Robert and began to build on it. By asking questions Samantha understood Robert better, and Robert, having been listened to, was more willing to listen to Samantha.

Breakthrough in conflict comes when we start asking questions and listening to the other person. You have to ask honest questions to understand them, not to manipulate them. Honest questions de-escalate emotions and defensiveness.

Once we actually hear the other person, we find common ground. Affirm that. And build on it. If you identify specifically what you don’t agree with, address that point. Ask them how they see it.

Now, the two of you are communicating instead of arguing.

Question: What questions have you found helpful in breaking through conflict? You can leave a comment by clicking here.

4 thoughts on “How To Breakthrough Conflict With Questions”