When leading others, your leadership approach will influence how successfully others will perform their jobs. It’s important to know when to teach and when to coach. Get it wrong and you can do more damage than good. Get it right and you can motivate and empower people for excellent results. 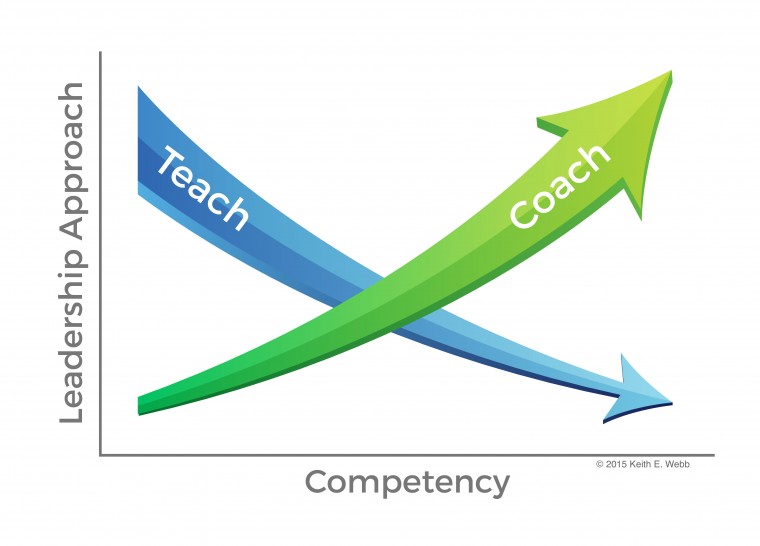 Teaching and coaching are not the same things. Each is a leadership approach that can get achieve good results in the appropriate situation. Let’s look at each skill, then I’ll share my experience training our new Administrator.

The first question to ask yourself is: Is the person capable in this task? Capable, doesn’t mean perfect. And it doesn’t mean they do the task the way you would do it. Have they been instructed in how to do it? Have they done it before?

If the answer to these questions are “yes,” then don’t teach them.

If you teach a task-capable person that same task you’ll appear arrogant, directive, and out of touch. They will believe you are either not seeing their performance or that you don’t think they are capable, which they feel they are. It demotivates and reduces trust. If they need further instruction to do the task differently, try coaching them instead.

If the person hasn’t done the task before, then teach them the task.

There are many ways to teach, and only one is to lecture them. Depending on the task, you can teach by demonstrating, giving a list of the task’s process steps to read and follow, asking another person to teach them, and of course, you telling them the procedure.

Good leaders give the time to help others learn what they need to be successful in their jobs.

Coaching is about drawing out information and skill from the other person. If they’ve been taught how to do a task, then there is information – the previous instruction, their experience trying the task, etc. – to draw on. Don’t jump back into teaching mode. Ask questions instead.

Asking these questions shows respect for the other person. It says, I think you’re a capable person even though you’re still learning this task. It also enables you to pin-point where the difficulty lies. Missing information? Missing skill? The problem is often not where we think it is.

What I Learned Training Our New Administrator

Here’s an example of how I chose when to teach and when to coach. Earlier this year, I hired a person to takeover much of the administration for my business. Because we use special software she didn’t know how to do the tasks involved. I had to teach each task and then support her in becoming competent to do them.

Here’s what I learned:

All this was task-based. Meaning, we looked at her ability to do each task and then I responded with the appropriate leadership approach. Which means in practice, you will sometimes teach and sometimes coach the people you work with. We need to be ready to switch from one to the other as needed.

Good leaders give the time to help others learn what they need to know to be successful in their jobs.

Question: How do you determine when to teach and when to coach? You can leave a comment by clicking here.