Most leaders are skilled communicators. By that I mean they are good talkers. Communication is so much more than words. Sometimes the most powerful thing a leader can say—is nothing. Silence has a habit of revealing meaning. 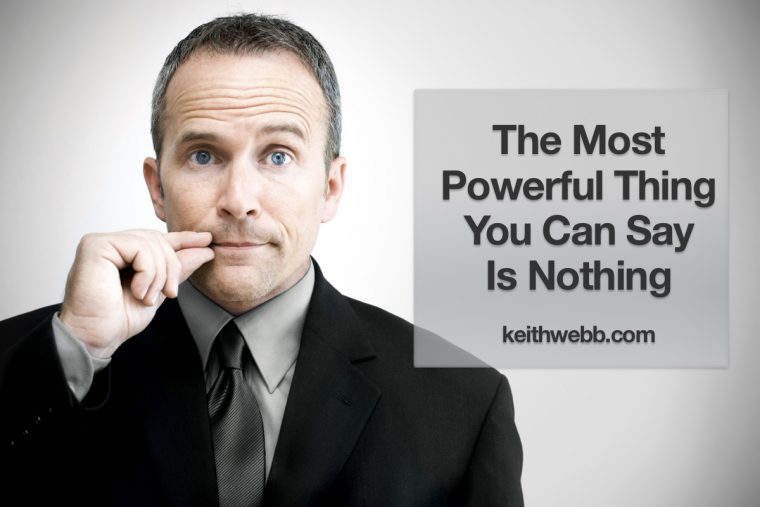 The ability to speak effectively is a strength worth developing. Through words, I help people learn, grow, and achieve results. I teach groups and lead workshops by telling stories and explaining. I coach individuals by asking questions. I lead my organization by casting vision, encouraging, and directing.

However, in my desire to communicate effectively, it’s easy to over-rely on words. A well-placed pause or an extended silence, especially after a powerful question, can communicate deeply.

I remember coaching a leader about his team’s performance. As we talked, we “bumped into” a tough inner struggle this leader had long ignored. I asked, “Are you ready to discuss this?” Then we were both quiet.

During the uncomfortable silence that followed, many things went through my mind: Do I need to explain what I meant? Maybe I should share my story of facing a tough internal challenge. Did I offend him? Do I have enough trust built to go there with him?

While I second guessed myself, he was self-reflecting on the truth of his situation. My silence led him to face his issue. He quietly replied, “Yes. I need to deal with this.”

We over-rely on words. A well-placed pause or an extended silence can communicate deeply.

Silence Has A Habit Of Revealing Meaning

In conversations and meetings, many of us don’t like silence. We equate it with awkwardness, boredom, or disagreement. While that’s sometimes true, it’s also unfortunate. For silence is a powerful tool to engender reflection. Take a look at some characteristics of appropriate silence in a conversation:

Use the combination of a probing, reflective question followed by silence to communicate. Remember, communication is a two-way process. You want to hear the other person’s reflection and thought-gathering. Ask questions like:

Watch for internal things to be stirred during conversation silence. When a person shares their reflection acknowledge what was said and probe further. Help them clarify what they might not have even been aware of, their root motivations, worries, ambitions, and values.

In the end, when we communicate at this level, understanding and commitment increase. Others feel heard, in sync, and ready to move forward. You can’t talk your way to these results. You’ve got to listen. And that means embracing silence.