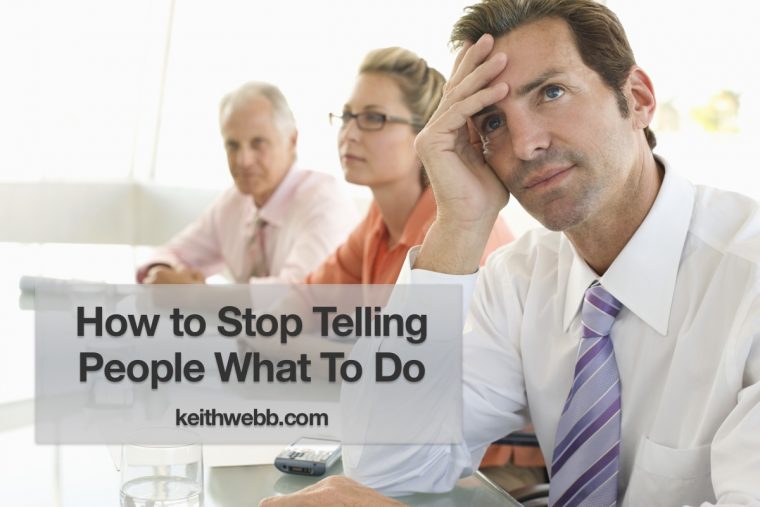 Your colleague is making little progress on a project. You know how to do it, so you try to help by telling him what he needs to do next. Things will now move forward at lightning speed because we’ve clearly instructed him, right? Not likely.

You know this! But it doesn’t stop you from telling people what to do. You are not alone.

Even though we know that telling people what to do doesn’t work, leaders steadfastly refuse to give up the practice and learn new ways of working with people.

Why We Tell People What To Do

If a lack of information were the only problem, then telling them what to do would make sense. However, information usually isn’t the main problem. Something else is.

A lack of information is rarely the problem. So, telling people what to do won’t help.

Information Is Rarely The Main Problem

There is usually more going on behind the scenes that stops people from moving forward. It may look like the problem is only a lack of information, but it rarely is.

Here are 4 reasons telling people what to do doesn’t work, and what to do instead.

If people were machines, then we could just tell them what to do, and they’d do it. Machines are limited. People are much more capable, creative, and intelligent. When we’re trying to get people to follow our directions, we see their intelligence as a problem. One of my old bosses used to say, “I’m not paying you to think. I’m paying you to do what I tell you to do.”

Software makers are trying to create Artificial Intelligence, we already have Intelligence in the people we work with. We need to tap into people’s intelligence and stop treating them like machines.

When you think of people as capable, creative, and intelligent, you’ll get curious about why they might be stuck. Then, you’ll see more options than simply “they don’t know, so I’ll tell them.”

5 thoughts on “How To Stop Telling People What To Do”