You are in a meeting. Your phone vibrates, you read the message, type a response and set the phone back down. The whole process takes you only 15 seconds. A new study says you’ve just irritated your boss and colleagues. 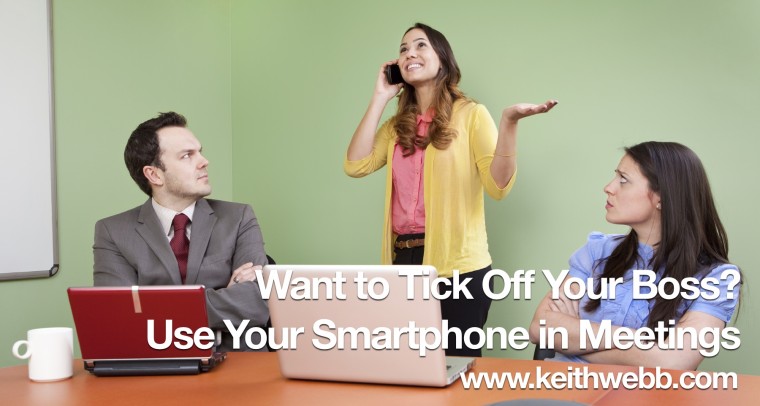 One time, I witnessed a pastor take a call in the middle of teaching a group of people. “Hello? Can I call you back, I’m teaching. Yes, right now. There’s a group here. I’ll call you back.” Ridiculous! Yet, even more mundane phone use causes offense, and you may not realize it.

Last year, a study by USC Marshall School of Business Center and Howard University looked at attitudes toward smartphone usage during meetings. They asked about texting, emailing, and taking a phone call in both formal meetings and informal meetings. The results were surprising.

The number of people offended by smartphone use was much higher than I predicted. How about you?

Looking at gender differences, women were half as likely as men to think smartphone usage was okay.

What a 27 year-old guy and his peers deem appropriate smartphone use is most likely offending two-thirds of everyone over 41 years-old. These people are likely include the boss, her colleagues, a future manager, etc.

Using Your Phone to Communicate Respect

When I meet for a coaching conversation I turn my phone on silent and keep it off the table. The study showed that 20% of people considered it rude to even have your phone out on the table. My reason is that I want to focus on what the other person is saying. I want to give them my attention because I believe we can accomplish more by mono-tasking.

In group settings smartphone use is like a yawn, it spreads. Try it. Pull out your phone and start clicking. Soon others will take out their phones. The result is that people are no longer focused and engaged with the group and the topic at hand. And that’s the real loss.

Recently, I met with an executive at a coffee shop. While we were talking his phone rang. He apologized, took it out of his pocket and without even looking at the screen turned it off and continued our conversation. That small action demonstrated to me that our conversation was important him. I was the full focus of his attention and that made me feel like a million bucks!

If you want to focus and to communicate respect for others then keep your smartphone in your pocket.

Question: What smartphone faux pas have you witnessed? You can leave a comment by clicking here.

3 thoughts on “Want to Tick Off Your Boss? Use Your Smartphone in Meetings”