If you want to grow your results by 10% or 20%, you can just work harder, be more disciplined and efficient. If you want to double your results, you can’t do more of the same, you have to be different. Here’s how. 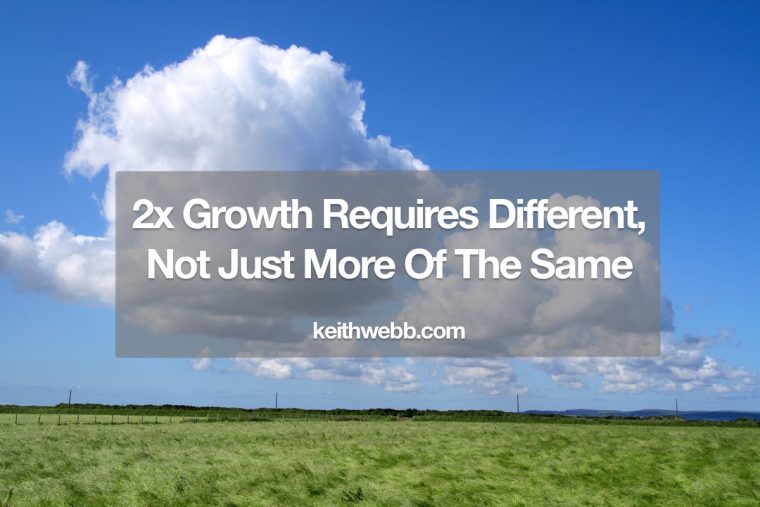 In 2015, my organization had its best year ever. We trained more people and made a deeper impact in their lives. Finances were strong. Work-life balance of our team was healthy. Wonderful!

I wanted us to make a even great impact. So, at the beginning of 2016 I set a goal to increase the number of people we trained by 20%.

To grow 20% we functioned with a “more of the same” approach. After all, what we were doing was working great for us. We added several more events. We made a few administrative processes more efficient. We worked smarter and harder.

A “more of the same” approach uses:

It looks like we’ll achieve our goal of 20% growth in 2016, which is fantastic. A side effect of this growth, however, is our systems are running at capacity and our staff can’t continue at this pace.

Consider what might happen if I announce another 20% growth goal for the coming year. Our team might mutiny – beginning with me! More of the same, yet faster, more disciplined, and more efficient, can only take you so far.

If you want to grow 20%, be more efficient. If you want 2x growth, you have to be different.

In the 1990s, Apple was a company many predicted was about to fail. Yet, Apple has become one of the most valuable companies in the world. They didn’t achieve this result by simply increasing the number of computers sold, they released radically new products. Look at the results:

At each step Apple had to think differently. The company’s reinvention of itself caused the dramatic growth. Don’t miss that with each reinvention, all the people invested in the previous products and approaches screamed. The media said each of Apple’s new products would fail and they should stay with what they did well.

Here’s the thing, it’s not possible to achieve 2x growth by doing “more of the same.” You need:

Apple did all this and achieved an impossible 100x growth over 15 years to become the largest company in the world.

It’s not possible to achieve 2x growth by doing “more of the same.”

2x Growth May Be Easier To Achieve Than 20% Growth

I’m afraid to say it, but what I really want to see next year is 2x growth. Twice as many people trained. Double the impact in their lives. Twice the financial bottomline. And double the work-life balance for our team. (Not sure what the last one means, but I like the idea!)

I want us to shift from a “more of the same” approach, to think and work and be fundamentally different in order to achieve 2x growth next year. As I’ve considered this statement and tried it out on our team, I’ve noticed a different reaction to 2x growth versus 20% growth.

“More of the same” can produce incremental growth. But people long for dramatic results. We want to grow and improve personally and professionally. And we want to see that growth translated into dramatic organizational results.

The Key Is A Different You, Not More You

The single greatest factor is all these “differents” is a different you. Dramatic results require a different you, not just more you. It’s your thinking and your actions that produce the results you achieve now. To grow 20% just do more of those things. But to double, you’ve got to think differently and then act differently.

Being different means examining your assumptions, your mindsets, and your motivations. You’ve got to get real and brutally honest. You’ve got to stop making do and putting up with. None of this is easy. Change rarely is. But this is the path to exponential growth.

Question: What would ‘being different’ look like for you? You can leave a comment by clicking here.

3 thoughts on “2x Growth Requires Different, Not Just More Of The Same”