We’re all trying to help people change. Yet, changes are too few and too slow. The biggest reason is we’re focused on the wrong thing. By moving conversations from WHAT, the behaviors, to WHY, the meaning underneath those behaviors, we can see real change. Here’s how. 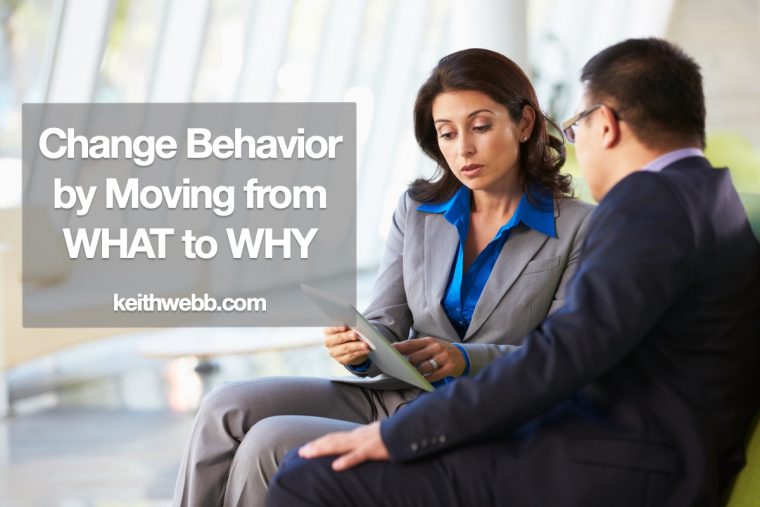 I worked with a group of CEOs to help them move from micromanaging to a more developmental approach with their teams. Five minutes into my workshop, one CEO became a bit animated. “If we hired qualified people, I wouldn’t have to develop them,” he said. “I don’t have time for this!”

I asked the CEO, “How often does someone on your team ask for your opinion or help?”

“Several times a day,” he replied.

“What reasons keep them coming back to you?”

“Because I know how it should be done. They either don’t know or don’t have the confidence to do it,” the CEO said, justifying his behavior.

My advanced course, Coach The Whole Person, will help you coach the internal ways of being, mindsets, and development of your clients. It earns 23 ICF ACSTH training hours. Find out more here.

Change Behavior By Moving from What to Why

Up to this point in my conversation with the CEO, we were talking about his employees and their behaviors, and his attitudes and his behaviors. Now, watch as the conversation moves the CEO toward why he thinks and behaves this way.

I will ask 3 questions to draw out the CEO’s why. First, I probe about the meaning he makes of his situation and then I ask for changes in his thinking.

Back to the CEO, I asked, “What inside you is holding you back from really letting go?”

“And what does that mean for you?” (Notice I’m not asking about employee past behavior, but rather, what it means to him.)

“It means more work. I’ll have to fix it. Ultimately, it means I’m failing,” he said.

“Right now, you’re preemptively fixing things, by micromanaging your team. How do feel about how you are responding now?”

“What shifts need to take place in you to change this situation?”

“I need to stop seeing myself as everyone’s solution. Our company is too big for that now. I need to shift the time I spend micromanaging to time developing my team’s capacities. But I don’t know how to do it.”

“Well, you’re in the right place, that’s what we’re working on today,” I responded.

After the CEO’s initial outburst, it would have been easy for me to dismiss him as a dinosaur. One of those leaders who see employees as robots, not human beings. But probing behind his words, to his why, I found a person who was overwhelmed, afraid, and doing the best he could.

Effective coaches coach the person, not the problem.

He was wasn’t ready to explore behavioral changes until he had a shift in his thinking. Behavioral change requires internal shifts. To get there, move your conversations from what to why.