Back in the 1980s John Grisham was a busy, young lawyer – who wanted to write a book. He had the vision to write, but little free time. Does this sound familiar? Here’s his story and how you can achieve your big goal. 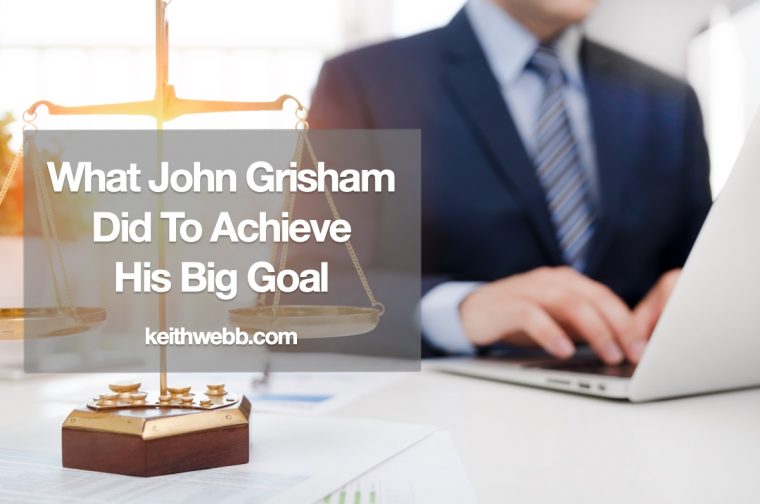 Grisham couldn’t stop working. He had a young family and a busy practice. What he could do was become intentional. He decided to go to his office early and write just one page a day. And he kept going. Week after week, he continued writing a page a day, until 3 years later his first novel, A Time To Kill, was completed.

I like this true story, because it challenges all my excuses for why I don’t pursue my goals. Grisham overcame the inertia of his busy life by being intentional and persistent.

A young lawyer named John Grisham wrote his first novel by being intentional and persistent. You can too. Click To Tweet

Consider your goal. The thing you want to do, but haven’t been able to accomplish. You know the one I’m talking about.

The flow of your daily schedule is like a river. If you’re going to achieve something outside the normal flow, then you’ve got to be intentional.

Grisham’s writing plan may look simplistic, but it incorporated best practices for getting things done. Let’s look at 4 ways you can increase your intentionality:

Your goals won't be done 'when you have time,' because you won't ever have more time. Click To Tweet

Seth Godin wrote a neat little book called, The Dip. He writes about how we start off excited to begin something new, but soon things become difficult, less glamorous, and hard.

We face the Dip.

This, he says, is where most people give up. But those who keep going, those who push through, reach the far side of the Dip where the results are.

“Successful people don’t just ride out the Dip,” Godin writes. “They don’t just buckle down and survive it. No, they lean into the Dip. They push harder, changing the rules as they go. Just because you know you’re in the Dip doesn’t mean you have to live happily with it. Dips don’t last quite as long when you whittle at them.”

Keep going. Even if, like Grisham, it takes you 3 years. Determine that you will not stop.

If your goal was quick and easy, you would have achieved it already. Use intentionality and persistence to break inertia and reach your goal.