“You see, but you do not observe. The distinction is clear,” said Holmes. Many people see just fine, but are observation-blind. Leaders need the ability to observe. Leaders must recognize patterns and understand the significance of what we see. Observation can be learned, as Sherlock Holmes will teach us. 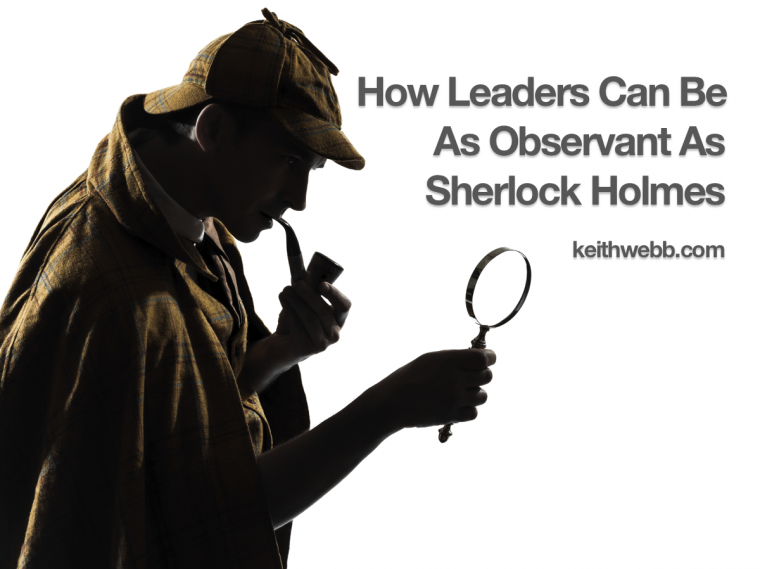 What I admire in Sherlock Holmes is how much he could know about a person by just looking at them. It was almost magical the things he could deduce about a person after meeting them a moment earlier. It wasn’t magic, it was observation.

The difference between seeing and observing is noticing details and recognizing patterns and meaning from what we see.

As leaders, we need to move beyond seeing to observing. When we do we’ll be better leaders and recognize opportunities and threats that others do not observe. Here are 5 ways Sherlock Holmes can teach leaders to be more observant.

“You know my method. It is founded upon the observation of trifles.” – Sherlock Holmes in The Bascombe Valley

Imagine you are driving a car. You approach a green light and enter the intersection. You hardly notice another car approaching the intersection from the right. Three seconds later that car smashes into your car.

What little things in your personal life and work are you not observing?

“The world is full of obvious things which nobody by any chance ever observes.” – Sherlock Holmes in The Hound of the Baskervilles

Observing people is an essential leadership skill. Some things are so obvious that we don’t even think about them. But are they?

Have you observed what motivates the people with whom you work? How about their preferred communication method – phone, text, email, in-person, etc.? What about the possible reasons why they are succeeding (or not succeeding) at their job?

“Having gathered these facts, Watson, I smoked several pipes over them, trying to separate those which were crucial from others which were merely incidental.” – Sherlock Holmes in The Crooked Man

Another essential leadership skill is to recognize trends that effect your business. You’ve got to sort through all the clutter of information, trends, statistics, and relationships and make meaning of them.

What changes are taking place in your market and with your customers? What new opportunities are emerging? Leaders who see the data and can make sense of its significant are observing. And thriving.

4. Sherlock Holmes Observed What Could Be.

“There is nothing more deceptive than an obvious fact.” – Sherlock Holmes in The Bascombe Valley Mystery

We need to observe more than just what is, what could be. In the 1960s it was an obvious fact that Japanese cars would never sell well in the United States. Until recently, it’s been an obvious fact that Apple computer will always be a niche company and cannot compete against PCs.

Obvious facts blind us to opportunities, improvements, new products and services. What obvious facts do you need to question?

5. Sherlock Holmes Observed What Wasn’t There.

Inspector Gregory: “Is there any point to which you would wish to draw my attention?”

Sherlock Holmes: “To the curious incident of the dog in the night-time.”

Inspector Gregory: “The dog did nothing in the night-time.”

Sherlock Holmes: “That was the curious incident.”

To observe what isn’t there is difficult. The process takes extra steps. You must observe what is there, then what you would expect to be there, and finally notice what is missing.

In coaching, this comes up regularly. One leader I coached showed little response to his supervisor taking a favorite responsibility away from him. When I asked about the lack of response, he confessed that he was planning to quit the company so it didn’t matter anyway.

Like Sherlock Holmes, leaders see what other people don’t see. We observe patterns that others do not recognize. And we find meaning in what we observe. Once you learn the skills of observation it becomes quite elementary.

Question: What is your best observation tip? You can leave a comment by clicking here.