Communication is a two-way street. Someone talks. You hear, then interpret what they said. And this is the point where things can go wrong. We think we understand what they are saying, but often we don’t. Here’s why and what to do about it. 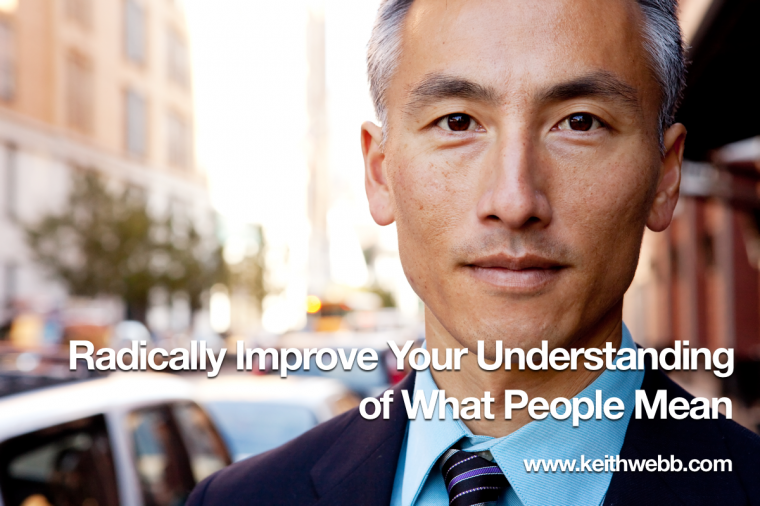 At an Apple iPod release presentation a reporter asked how long the battery would last. “For years,” the Apple representative responded, but the reporter interpreted it as “four years.” The story went out and Apple spent weeks assuring people that their iPod battery would function longer than just four years.

I coached an executive who sounded angry when he communicated something in a hurry. In his mind, he was communicating factually and briefly. People disregarded his words and instead received the angry meaning his tone of voice communicated.

3. Non-verbal is more important than what you say

In the late 1960s, Albert Mehrabian did a series of studies that concluded: “When there are inconsistencies between attitudes communicated verbally and posturally, the postural component should dominate in determining the total attitude that is inferred.” In other words, people believe your body more than your words.

4. We add our own meanings

Humans think through filters of emotion and experience. When I was 12 years-old I ate Shrimp Cocktail that had gone bad. I was sick within hours. As an adult I once discussed dinner plans with another couple who wanted to serve Shrimp Cocktail. Immediately, I felt grossed out and wondered why this couple would want to serve that. I was conscious of my previous experience, so I adjusted. But many times we are not conscious and retain our meaning and emotions, even though those were not intended by the communicator.

How to Radically Improve Your Understanding of What People Mean

To radically improve your understanding what people mean you must assume you don’t know, be curious, and then ask them what they mean.

Assume you don’t know what they mean. This is difficult. Our minds tell us we do understand. However, as I pointed out above, our interpretations are not to be fully trusted. Sometimes we think we understand what the person is saying, however, they mean something different.

Stay curious. Ask questions. Clarifying questions are powerful tools to get at their real meaning.

And this is not just for you. By asking other people to clarify, they become clearer in their own minds. As they explain they feel heard and also reveal their meaning. You are coaching the person while gaining a better understanding for yourself.

Asking clarification questions will radically improve your understanding of people’s real meaning. The fact that you listen and ask clarifying questions will communicate that you respect the other person.

Question: How do you get at other people’s meaning? You can leave a comment by clicking here.

4 thoughts on “Radically Improve Your Understanding of What People Mean”