Character isn’t talked about much anymore, yet it is the foundation upon which our lives are built. Our business, marriage, and friendships are all resting on the strength of our character. Weak character often isn’t revealed until it’s too late. Here are 5 ways to strengthen your character. 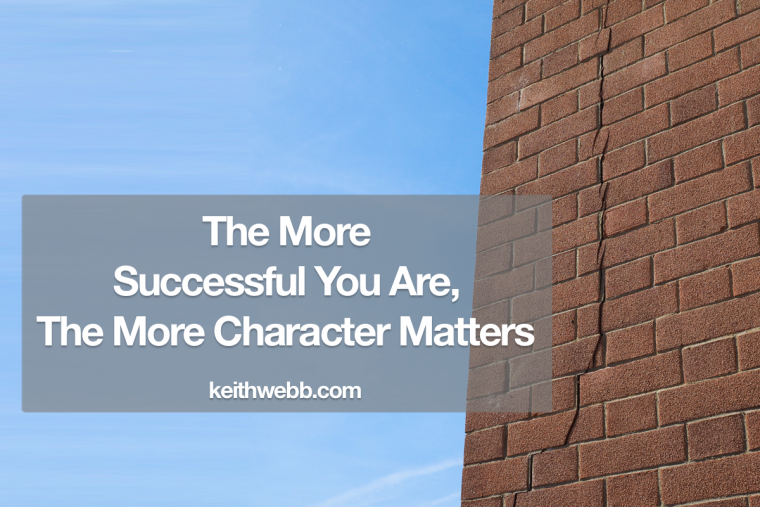 Character is who you are when no one is watching. External oversight keeps most of us in line. When we feel freedom to do as we wish, our character comes out. Leaders are often in positions beyond easy oversight and therefore have their character tested.

The More Successful You Are, The More Character Matters

Success challenges and reveals character. We often excuse the poor behavior of successful people. It’s an ends-justify-the-means mistake. As the following examples illustrate, as success grows, cracks can appear in the foundations of character that can topple the whole building.

In 2013, Scott Forstall, Vice President of Apple’s successful iOS division left the company. Though Apple didn’t provide details, Forstall, a Steve Jobs favorite who was viewed as the next possible Apple CEO, was asked to leave. He was hugely successful leading Apple’s iOS to become a major financial asset. But he was also said to be polarizing figure and have a fiery personality that was difficult to work with. In the end, it appears that his success was not enough to save him from his character flaws.

For me, this next story is exceptionally sad since I know people involved. Mark Driscoll, a popular pastor whom Forbes called “one of the nation’s most prominent and celebrated pastors,” resigned in 2014 at the height of his ministry. A writer for The Atlantic summed up his fall and the implosion of the megachurch he founded saying, “there was no single disgrace or crime that brought Driscoll down. Instead, it was a series of accusations: of plagiarism, crudeness, a bullying management style, unseemly consolidation of power, and squishy book-promotion ethics, to name a few.” The elders of his church saw all this, but did Driscoll and themselves no service by not reigning him in.

Don’t miss that there were no moral or criminal charges against these two leaders. It was mainly how they treated other people. Unchecked patterns of poor interactions with people appear to have unseated Forstall and Driscoll while at the top of their games.

How To Develop Your Character

The program you can take to build your character is called “life.” Character development happens on-the-job, during your daily life. Here are a few things that will help.

As our responsibilities grow, the pressure to perform and the freedom of our position tests our character in new ways.

Like constructing a building to withstand an earthquake, the time to develop your character is long before it is tested.

Question: What practices do you use to develop character? You can leave a comment by clicking here.

One thought on “The More Successful You Are, The More Character Matters”