Contrary to popular belief, the key to success are not great ideas. Far from it. Ideas actually might be in the way of your success. Here’s why and how to remove them. 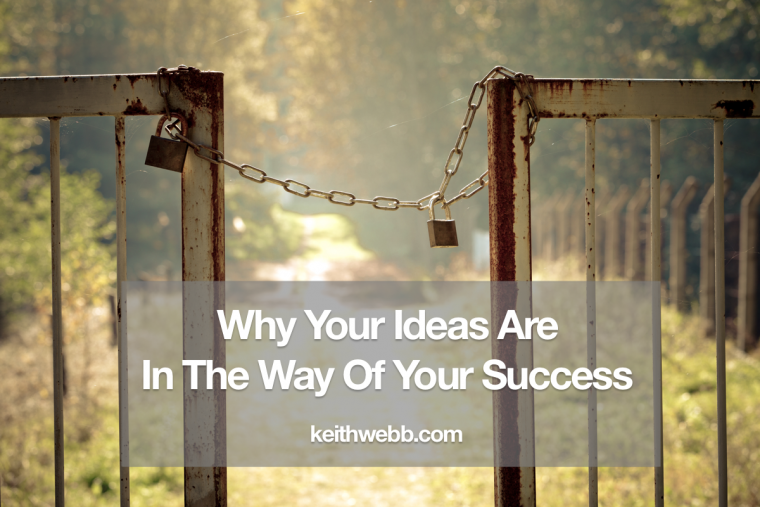 A few years ago, I met with our team of instructors to talk about increasing participants in our professional coaching program. This meant marketing: how we offer it, where we hold it, and how we communicate about it. What I heard were ideas – not about implementation but about new training exercises and programs.

Some had ideas for new ways we could lead the training program. I asked, “Will this new way of leading the exercise increase the results for participants?”

“No, but it would be fun to do something different,” the instructor replied.

“It is different for every new participant. And if it’s already working, I want to put our energy into implementing rather than continually changing our program,” I responded.

Next there were ideas about new programs we could create. All were good ideas, and we’ve since created a few of them. The trouble was, working on these ideas at that time would distract us from further implementing the ready-to-go program we already had.

After yet more ideas were voiced, a bit frustrated, I announced in one of my less sensitive moments: “Enough with the new ideas! Write them down. Keep them. But I’m banning new ideas for the next six months. Our task right now is not to revise, tweak, or create new programs but to execute on the program we already have.”

We did, and that training program took off.

The challenge most leaders face is to narrow their ideas, choose one, and implement it.

Why We Love Our Ideas

Everyone has ideas. And we usually think our ideas are winners. Here are a few reasons we love ideas:

“Ideas are a dime a dozen. People who implement them are priceless,” Mary Kay Ash said, and I agree.

What To Do With Your Great Ideas

It’s easy for leaders to be distracted by ideas. Here are five steps to take your great ideas and put them into action.

At some point you must choose which ideas to implement. We don’t like to choose. Saying “no” to ideas while implementing others is difficult. Instead we try to hedge our bets by keeping several ideas on the table. We don’t fully commit to working on any one idea. We dabble.

This is a mistake.

Mark Cuban said, “Companies fail for lack of brains and effort.” Implementation takes hard, focused, long work. Most people won’t do the work. It’s as simple as that.

I’m not mentioning when to quit, because that’s usually not the problem I encounter with leaders. The challenge most leaders face is to narrow their ideas, choose one, and implement it.

Don’t let your ideas get in the way of your success, implement them. Or at least one of them.