We all mess up from time to time – we say the wrong thing, fail to fulfill a commitment, or make the occasional bad decision. We worry about messing up, but no one expects you to be perfect. It’s how you respond to your failures that builds or breaks trust with those around you. Here’s how to strengthen relationships after messing up. 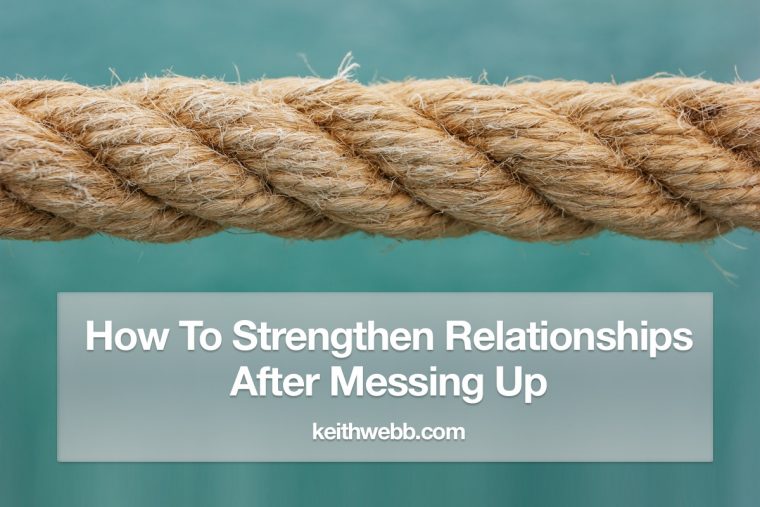 Compare the responses of these two leaders who messed up:

Vivian had the responsibility to find the location and negotiate the price of the venue where we would hold an event. Two months before the event, when we are ready to announce it, we found out Vivian hadn’t found a location. Our planning group was astonished. Vivian said she had been busy, complaining, “I am the person in our group doing the majority of work!”

Robert was in charge of the team to develop his department’s strategy. It was to be a team process, with all members giving input, reaching consensus, and drawing up the strategy. The first two meetings Robert facilitated discussions to draw out ideas and concerns. At the beginning of the third meeting, he revealed two large posters with a detail strategy drawn on them.

The group was shocked that Robert created the strategy on his own. At first he defended himself, “I only wanted to make a first draft using all our ideas. I thought it would help us to move forward.” The group told him it did not.

“I realize I have overstepped,” he said as he understood what he had done. “I made my vision the draft of the strategy. That must feel disempowering and cause you to wonder if you’ve wasted your time on this team. I apologize.” He took down the posters, crumpled them into a ball, and put up two new posters, “If you’re willing, could we continue working together?”

You are judged more by how you respond to your mistakes, than the mistake itself.

As you might predict, the responses to Vivian and Robert were quite different. Vivian’s coworkers were critical of her and noticed how she shifted blame when things didn’t go well. Pretty soon no one wanted to work with her. Robert, despite breaking initially breaking trust with his team, ended up building more respect and trust because of his response.

These two stories illustrate that you are judged more by how you respond to your mistakes than the mistake itself.

5 Steps To Strengthen Relationships After Messing Up

Robert’s response was satisfying to his team because he was sincere. Five important steps demonstrate your sincerity:

How you respond to messing up can build more trust than never making a mistake in the first place.

Here’s another example of all 5 steps in action:

“I was wrong when I pushed for a decision on the website design. As a result of my hurried decision we’ve hired the wrong person for the job and will need to start over. Like me, I’m sure you’re frustrated by this, even more so since you warned me not to move forward so quickly. I apologize for my impatience. I am ready to do what it will take to get the right designer and will move some of my discretionary budget to the project so we have the funds we need.”

When you do this 5 step process of responding to your mistakes, you move from breaking trust to building relationship. People will not only remember how you responded, they will use your response as a model for how to respond when they mess up.

How you respond to messing up can build more trust and loyalty than never making a mistake in the first place.