Your colleague walks into your office and asks for your advice. You want to use a coaching approach but know that you can’t have a full-on coaching conversation. What do you do? Go undercover. Be an Undercover Coach. Here’s how. 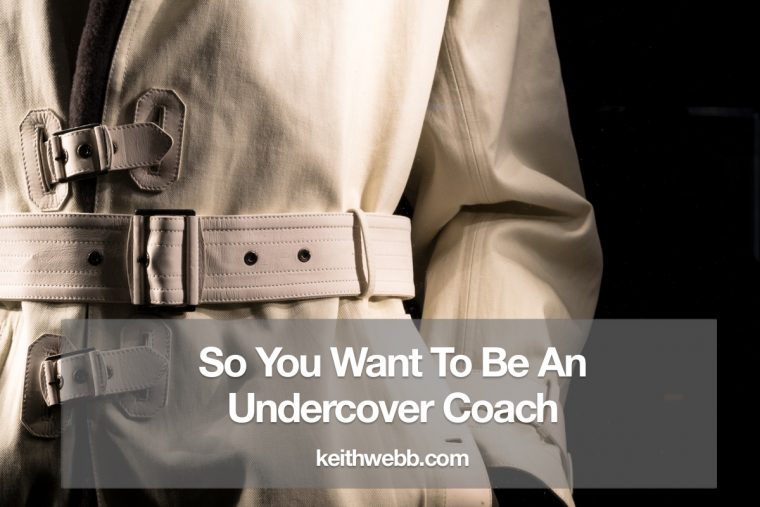 I love the clarity that comes with a well-defined coaching relationship. I know, and the other person knows, we’re coaching. We know I’ll ask probing questions and they’ll do most of reflection and talking.

You are not likely to have a defined coaching relationship with your co-worker, your teenager, or your boss. How do you use coaching skills in your day-to-day conversations? Go undercover!

How To Be An Undercover Coach

You already know the power of coaching conversations to help people develop personally, solve problems, and move forward. What you may not know is that coaches can to go undercover.

Undercover Coaches use the same coaching mindsets, coaching skill set, and coaching tool set in their normal interactions with people. We can coach anywhere, anytime. Not everything should be coaching, but much more could be coached.

Get yourself in the habit of integrating coaching skills where you can. Don’t take an all-or-nothing approach.

Integrating coaching skills means not trying to go through all 5 steps of The COACH Model®.

Undercover Coaches use only the coaching skills needed for the situation.

Undercover, But Still A Coach

Undercover Coaches aren’t operating in the role of coach, but they do follow coaching principles. Use coaching mindsets, skills, and tools wherever you can.

Here are a few ideas:

As I mentioned, Undercover Coaches use any part of a coaching approach that works for that situation. Don’t worry about “pure” coaching, you’re not in a coaching role. As you integrate coaching skills into your various leadership roles, you’ll find more and more ways to coach instead of direct.

I believe coaching is much more than a role. It’s a mindset first and then a set of skills and tools that we can integrate into our day-to-day life.

Question: How have you integrated coaching into your day-to-day life? You can leave a comment by clicking here.

8 thoughts on “So You Want To Be An Undercover Coach”